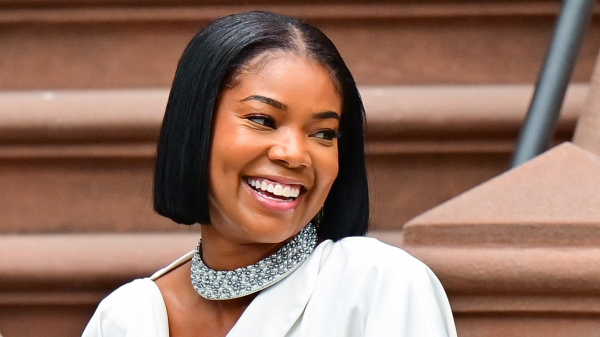 Growing up as a kid with a mole near her mouth, my feelings about that little area of raised, darker skin could have gone in any number of ways. Thankfully, just as I was entering middle school, supermodels Cindy Crawford and Niki Taylor were on countless billboards and magazine covers with their own lip-adjacent moles, which me not only feel OK about my beauty mark but sincerely believe that it was a beauty mark. Not everyone gets such glamorous mole validation from celebrity role models, but Kaavia James Union Wade is getting a lesson on loving her skin from the best celebrity role model possible: her own mom, Gabrielle Union.

Union posted to TikTok on Thursday, August 12, writing, "Teaching her to love every part of herself 🤎," over a video of Kaavia and herself in a pool. But the relaxing moment was also a teachable one as Union showed her almost-three-year-old daughter that it's OK to have, accept, and even be enthusiastic about moles.

"Mommy has a lot of moles," Union says as she points to her chest and then her cheeks. "I got moles on my face."

"Oh no! I not have a mole," Kaavia replies, shaking her head.

"Well, I think you have a couple," Union says.

"Oh no, I got a couple right there," Kaavia decides, pointing to her mouth, at which point Union gently informs her that those are just her lips.

"I'm pretty sure you have a mole somewhere," Union says, pulling one of Kaavia's feet out from under the water. "Oh, there's your mole!" Kaavia seems fascinated as Union continues, "But see, it's not bothering anyone. So you just leave it!"

"Yes! We got moles!" Kaavia exclaims with adorable excitement — a sentiment Union repeats with equal energy. In fact, it's what she wrote in the caption, too.

I think it's safe to say that, as Kaavia gets older, Union will continue to impart mole widsom — like getting her skin checked by a dermatologist every year for any new ones or strange changes in existing ones. In the meantime, Union continues being a role model not only for her kiddo but for everyone who can use a little reminder about self-love and acceptance.